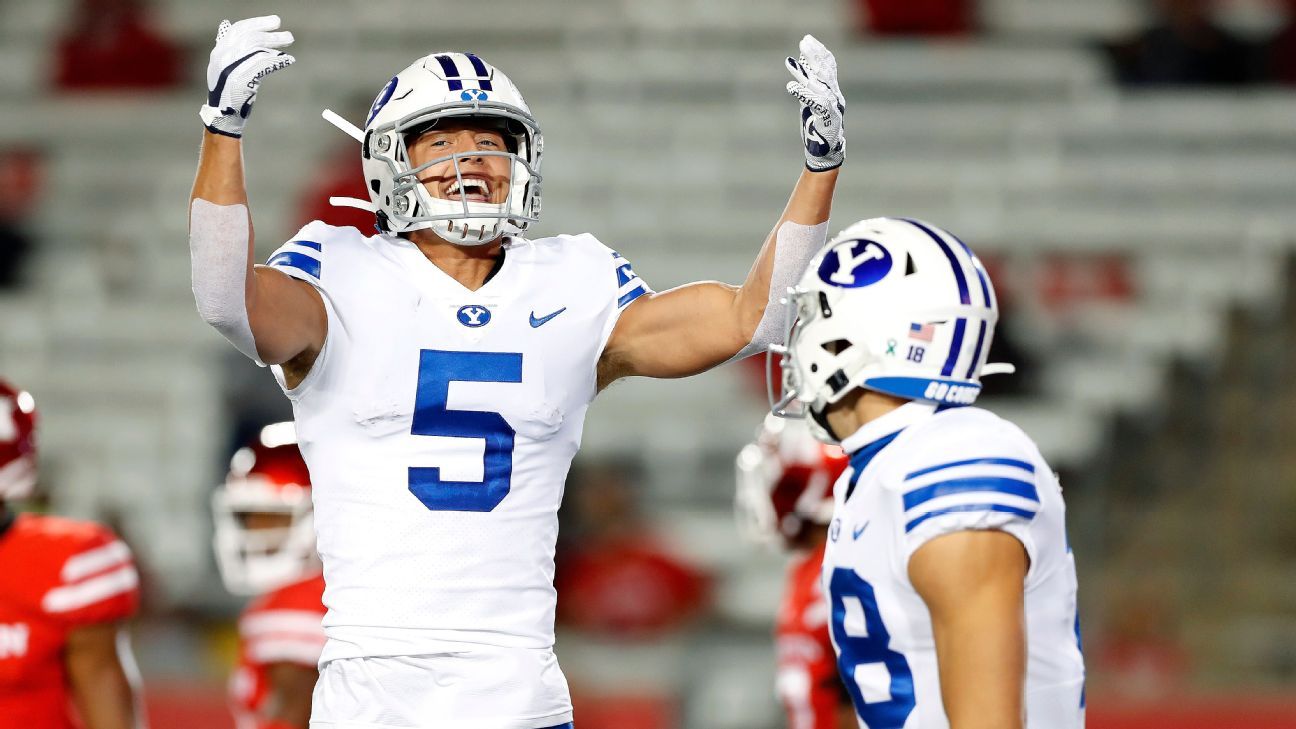 Welcome to Week 7 of the always unpredictable 2020 college football season.

We know there are big games happening! We just don’t always know who will be playing in them.

Speaking of, the biggest game of the young season is upon us as No. 3 Georgia visits No. 2 Alabama at 8 p.m.

In the meantime, we’ll keep tabs on all of that for you right here along with the big plays, the turnover doo-dads and the mascots.

The Ragin’ Cajuns had close calls their previous two weeks against Georgia State and Georgia Southern, and it finally caught up with them against Coastal Carolina, which is now 4-0. Louisiana didn’t play a particularly bad game; this was simply one of those games in which whoever had the ball last was going to win, and Coastal had it last. Though Louisiana’s undefeated season dreams are gone, there’s still plenty of season left for it to finish atop the conference. — Harry Lyles Jr.

An all-or-nothing performance produced just enough alls — seven gains of 30+ yards — for Sonny Dykes’ Mustangs to remain undefeated. SMU overcame four different deficits, and both teams missed long field goals in the final minute of regulation before Brandon Crossley‘s overtime interception set up the game-winning field goal. Four different receivers caught at least one 40-yard pass, and three finished with at least 100 yards. It was a heck of a by-committee performance in the absence of injured star receiver Reggie Roberson Jr. — Bill Connelly

BYU’s win was three distinct games in one: BYU bolted to a 14-3 early lead, Houston took control with a 23-0 run in the middle quarters, and BYU outscored the hosts 22-0 in the final 15 minutes. The BYU defense completely shut down an explosive Houston offense over its last four possessions, and even without star receiver Gunner Romney for much of the game, Zach Wilson went 25-for-35 for 400 yards and 4 TDs. This BYU team is for real. — Bill Connelly

We’re a week from the Big Ten’s return, so here are some cool Nebraska alternates celebrating the “Blackshirts” tradition of the Huskers’ defense.

The Legend of the Blackshirts ☠️

And while we’re on the topic, let’s all appreciate the ‘stache on Kurt Warner’s son, Cornhuskers wide receiver Kade Warner.

This is Kade Warner. He is a Nebraska football player. And he has the best mustache in America. #Huskers

“I don’t think it looks good. I just think its funny.” pic.twitter.com/u49rSfM4nU

Kick it into gear

Cincinnati made a little TikTok-esque video unveiling its road unis.

Unfortunately, the Bearcats’ game this week at Tulsa has been postponed due to COVID-19 cases, so they will have to wait to break these out on the field.

Make yourself at home

Georgia Southern will wear its white road uniforms at home for the first time Saturday when it plays UMass, who is playing its first game of the season, because the Minutemen’s away uniforms haven’t arrived yet from Adidas.

Last-minute change for a last-minute game … we’re wearing white to help out @UMassFootball, whose full away uniform set hasn’t come in yet!#HailSouthern pic.twitter.com/cBYseH9NvH

A tribute to Tom

Last month, Tom III, the beloved mascot of the Memphis Tigers, died, but his presence is felt at the Liberty Bowl once again thanks to a new billboard.

Tom III’s last game was a win over rival Cincinnati in late 2019.

Following a 4-0 start to the season, including a big win over a ranked Louisiana team on Wednesday, the Coastal Carolina Chanticleers have become a media darling.

Several media members on Twitter have started the hashtag #RankCoastal, and ESPN’s Scott Van Pelt even gave the Chants a shoutout on SportsCenter.

The national attention hasn’t gone unnoticed at the program.

Tulane announced earlier this month that fans would not be allowed for Friday night’s game with SMU, but it did little to deter Paul Layne.

The SMU super fan made it to his 525th straight Mustangs game on Friday. He was the only fan in attendance at Yulman Stadium.

The streak is a alive!! … Paul Layne with 525 straight SMU games #PonyUpDallas

Oklahoma’s dramatic 53-45 victory in the fourth overtime against Texas might have been a week ago, but the Sooners are still not over it. Just ask Brian Bosworth, Barry Switzer and Roy Williams.