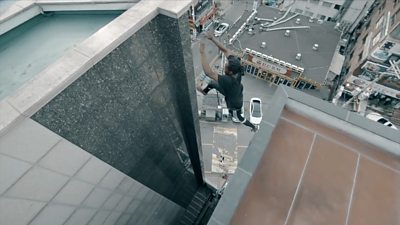 The parkour group STORROR has spent the last decade building its YouTube audience, and now has more than 6.5m subscribers for their striking videos.

Filmed in cities around the world, the group was recently asked to construct stunts and have performed in an action film by director Michael Bay.

The seven-strong group, based in Sussex, say it has taken 15 years for them to achieve their level of skill and agility, and that young people wanting to take up the sport should learn from experts “from the ground up”.

Warning: This video contains behaviour which could be imitated. Parkour should not be tried without proper training and supervision.

How will Little Mix fare as hosts of the MTV EMAs?

Jeff Bridges: Oscar-winning US actor reveals he has lymphoma

How Gordon Haskell made Radio 2's most requested song ever